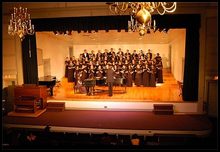 Originally completed on March 25, 1913, Pardington Hall was renovated in 1971 after a fire seriously damaged the structure. Now the site of Nyack College’s School of Music, Pardington Hall holds a large auditorium, several classrooms, as well as the college’s radio station, WNYK.

Olsen Auditorium has 505 fixed, theatre-style upholstered seats (431 on the main floor and 74 in the balcony). The auditorium is equipped with a house sound system and adjustable house lighting, as well as an LCD projector and retractable screen. There are two grand pianos on stage and an organ to the left of the stage.

Recently renovated in 2005, Bowman Gymnasium can be setup auditorium-style for conference groups with attendance over 450. Groups using the Gymnasium for a main meeting space have two options; either leave the auditorium setup for the duration of the conference, or, for an additional charge per assembly, have the setup assembled and disassembled each day to allow for use of the basketball court.

Simpson Hall was the first building built at Nyack College’s current location to accommodate the growth of the college, then a Missionary Training Institute based out of New York City. Construction began on April 17, 1896. The four-storied building, standing on four acres, measured 250 feet by 70 feet. The building was rebuilt on its original stone foundation in 1981, retaining its striking Victorian design.

Hilltop Auditorium is located at the north end of campus and can seat up to 200. The auditorium is equipped with a house sound system and adjustable house lighting, as well as an LCD projector and retractable screen.