Some people leave home for college, and college becomes like home. Then there are people like Xelena Santiago for whom college and home have become one and the same. 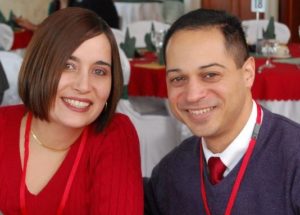 With both parents serving as employees of Nyack College—Joy, as director of student accounts and Rick, originally an admissions counselor, who later became director of database operations, Xelena and her younger sister Xylvie spent most of their girlhood on Nyack’s Rockland campus.

Rick Santiago, a 2007 alumnus of the Master of Science in Organizational Leadership program in Nyack’s School of Business and Leadership, was the staff member presented with the Commitment to Mission Award in 2011 for the way he served the Nyack community. A co-worker said of him, “Even though Rick worked massive hours late at night to make sure the faculty, staff and students had what they needed to be successful, all that effort pales in comparison to his passion to connect people to Jesus.” With the true grit of a Nyack Warrior, Rick Santiago courageously fought an unexpected battle with a cancer diagnosis and became earth’s loss and heaven’s gain on August 17, 2016.

One modern translation of Matthew 7:20 reads: “The way to identify a tree or a person[a] is by the kind of fruit produced.” Xelena Santiago is evidence of the Santiago family tree’s good fruit. Considering the number of hats she wears in the campus community, Xelena clearly carries on the legacy of servant leadership that both her parents modeled for their daughters. 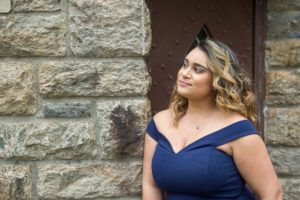 Xelena participated in “Woman,” Dr. Amy Davis Abdallah’s rite of passage program at Nyack College during her senior year of earning a degree in psychology. Paying forward her experience of being mentored, after graduation Xelena became Event Coordinator for the program, which nurtures personal transformation in young women through their relationship with God, self, others and creation. In addition to her leadership role with Woman, she served as a Christie Hall resident assistant reporting to Resident Director Heather Butcher, who became like “a second mother,” and another role model of leadership for Xelena.

After graduating, she transitioned to the role of graduate resident assistant. Xelena had the unique experience of now serving some of her peers as they pursued their academic, spiritual and interpersonal goals. Respect was reciprocal with an understanding that rules still had to be enforced when and if necessary. “I held myself to a level of integrity that never wavered,” she explains. Depth of maturity and commitment to her mission helped her serve her team and leaders well.

To support staffing changes, during the 2019-2020 academic year, Xelena became assistant resident director in Simpson Hall. This change that she felt took her out of her comfort zone, was another opportunity for her to rise to the call of leadership. The stretch included not only oversight of dorm residents, but now included studying for her master’s degree in Nyack’s Alliance Graduate School of Counseling while continuing to split her time between working for the Office of Student Development and the Office of Information Technology.

Xelena is truly living out the legacy of service. While her family ties were to the Rockland campus, she is looking forward to a new opportunity as a part of the Residence Life staff in the new residence hall in Jersey City. As she and her co-workers wrapped up the spring semester, her team was given the opportunity to creatively reflect on their Nyack experience. Her video stroll across campus vividly captures Nyack’s reputation for being a community of people—no matter the location—where legacy is born, bred and blossoms.