Nyack’s Warrior Radio is delighted to feature Martine Sainvil in its Alumni Spotlight this month. The interview with Martine will air on Friday, March 5 at 2:00 PM; Monday, March 15 at 12 noon; and on Wednesday, March 24 at 5:00 PM.

The 2016 alumna who graduated cum laude with a BA in early childhood education is a New York City Department of Education Pre-K teacher in Brooklyn. While she is living out her goal as an educator, Martine has another passion and undeniable gift—of singer-songwriter. Friday, February 26, her debut single, “Search My Heart” was released on all streaming platforms. Martine shares that the single, which she wrote while in college, is based on Psalm 139. “Search My Heart,” was written when I was reflecting so heavily on the deeper meaning of life.” She calls it her “cry out to God in the midst of searching for understanding.”

From the age of 11, Martine began to discover solace and happiness in writing lyrics, strumming her guitar and exploring her music talent—a pursuit that was encouraged by her grandmother who would find free music programs for Martine to attend as a child. During her teens, she attended the prestigious LaGuardia High School of Music & Art and the Performing Arts—made legendary by the 1980 movie “Fame.” 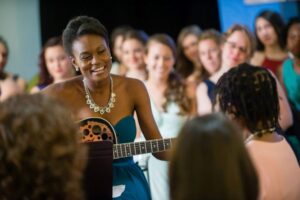 Among her many achievements at Nyack College was Martine’s completion of the “Woman: Rite of Passage” program founded by Bible Professor Amy Davis Abdallah. It was no surprise the Martine’s capstone project was to write and perform a song.

Dr. Davis Abdallah comments, I first heard Martine’s composition, “I Am a Woman,” when she dedicated it to her grandmother at our formal Woman ceremony. As Martine passionately and beautifully sang, there was hardly a dry eye in the house. “I Am a Woman” told our collective story of struggle, but empowerment through mentors. That’s why we chose it as our Woman theme song. Martine’s voice is influential, bold, and compassionate. I look forward to her positive impact on the world!”

This is a conversation you don’t want to miss!