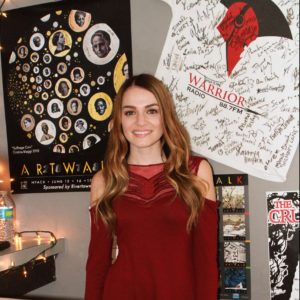 Caitlin Caporale, a contestant on Season 8 of “The Voice” was welcomed to the WNYK 88.7 FM studio along with guitarist, Stephen Mercier. The Newburgh, NY native recently released her debut EP, “Canvas,” which is available on all digital platforms.

After appearing on “Extra,” the syndicated entertainment news television show in 2011, she drew national attention. That performance won her the chance to sing for Grammy Award winner Christina Aguilera, who was so impressed with Ms. Caporale four years later the two sang a duet on “The Voice.”

This vocal powerhouse gives back to the local New York community with benefit concerts and fundraising performances to support organizations such as the Humane Society, Safe Homes of Orange County, Make-A-Wish Foundation, Wounded Warriors and Habitat for Humanity.

Tune in to hear her on Warrior Radio throughout the month of December.