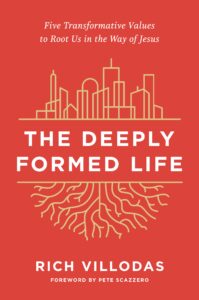 On the campus of Nyack College and Alliance Theological Seminary, not only do we celebrate our sameness, but our differences are celebrated enthusiastically also. As National Hispanic Heritage Month (September 15-October 15) begins, members of the campus community—which includes more than 31% of students, 19% of instructional faculty, 13% of administrative faculty and innumerable alumni  of Hispanic/Latino descent are saluted.

Today we celebrate with Nyack/ATS alumnus Rich Villodas, born into a Puerto Rican family of origin in the East New York section of Brooklyn. His first book, The Deeply Formed Life: Five Transformative Values That Root Us in the Way of Jesus, was released today under the Multnomah Publishers Waterbook imprint.

In addition to being an author, columnist and speaker, Rich Villodas is the lead pastor of New Life Fellowship Church in Elmhurst, NY. Prior to this role, he oversaw the small group ministry, served as a preaching pastor and went on to assume leadership of the congregation in October 2013, succeeding pastor and author Pastor Pete Scazzero.

Rich is a member of the Missio Alliance Writing Collective. His bold voice is heard among other leaders who address the topics of culture, formation, the global church, theology and witness. His writing has also appeared in the Sojourners magazine, a group committed to inspire hope and build a movement to transform individuals, communities, the church and the world.

During the outcry against racial injustice in the U.S. this past spring, Rich hosted a dynamic virtual webinar, “The Gospel & Race,” which required a replay to accommodate the high registration demand. In March 2019, he was one of the featured speakers at a New Life conference, “Gospel and Race: Breaking Down the Walls of Hostility.” Rich has also been the featured chapel speaker at Nyack for the Deeper Life Series. The widely respected alumnus received the Nyack College Young Alumnus of the Year Award in 2013 and the ATS Alumnus of the Year Award in 2015.