Legendary. It is a fitting word to describe the Nyack College treasure known as Dr. Marion B. Howe. Her passing away on Tuesday, September 15, gives us pause—like a musical rest—to stop and silently reflect on the well-lived life of Maestra Howe.

The Nyack alumna who earned her Bachelor of Sacred Music with honors in 1948, received a Master of Music degree in Vocal Performance and Church Music from Boston University with special studies in J.S. Bach. Her post graduate studies continued at Union Theological Seminary and Columbia University.

Marion Howe left an indelible mark on the Nyack Rockland campus for more than half a century—57 years to be exact.

Charter member of the Nyack College Honor Society. Member of the Nyack College Alumni Board and National Association of Teachers of Singing. Honoree of Christians in the Visual Arts, Who’s Who Among America’s Teachers and the World Who’s Who of Women in Education. Choral ministry roles at First Methodist church in Newark, the First Presbyterian Church in Nyack, Tarrytown Baptist Church and Simpson Memorial Church (now Living Christ Church) in Nyack. School of Music professor. Head of the Nyack College Fine Arts Department. Creator of Nyack’s English Handbell Choir. Director of the Women’s Chorus.

On the occasion of celebrating her 50th year of teaching (1997-1998) at Nyack, the Marion B. Howe Scholarship Fund was established at the College for students who are music department and music education majors. Administrators, faculty, staff, students and alumni honored the professor at a Jubilee Celebration and Banquet for her service to the institution. Upon retiring, she earned the distinction of Professor Emeritus and at Commencement 2006 she was conferred an honorary doctorate.

In all of her doing, it was her being that captured the hearts of literally thousands on and beyond the Nyack campus. Her grateful former students have praised her with descriptors for her “invisible guidance, “tools of tenderness,” “Christological clarity,” “passion,” “inspiration,” and being “a patient instructor,” “spiritual mentor,” “model of integrity” and “a friend.” 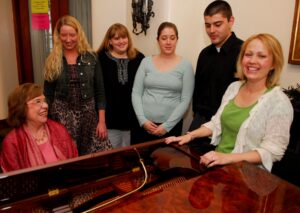 Prof. Marion Howe literally touched the lives of almost every Nyack student during her more than 50 years at Nyack and instilled in generations the strong conviction that the glory of God is seen in music and art, whether it be sacred or secular.

She worked closely with Dr. Lee Olsen, Dr. Harold Best and other music faculty to develop a strong curriculum for music programs and thus achieve accreditation for those programs by the National Association of Schools of Music.

Provost and Vice President for Academic Affairs Dr. David Turk captures the essence of the late music professor with the following words:

Marion was the much-loved fine arts professor who “dropped the needle” on countless Enjoyment of Music records so that thousands of Nyack students could not only learn the important musical pieces of the western musical canon but begin a life-long appreciation of classical music. Bach was her favorite and she considered “St. Matthew’s Passion” to be the greatest music piece ever written.

She led countless groups of students on a Winterim fine arts tour of London so that they could see and hear Strauss waltzes at Royal Albert Hall on New Year’s Eve, visit the National Portrait Gallery, Wesley’s Chapel and all the sites in and around London.

She taught private voice lessons to hundreds of music majors in her beautifully decorated studios in Berachah and Pardington Halls. Miss Howe’s legacy lives in her students who now are music ministers and music teachers in hundreds of churches and schools.

Arrangements are being handled by Chandler Funeral Homes, 45 Main Street in South Paris, ME where there will be a viewing on Monday, September 21 at 3:00 PM for family and 4:00-6:00 PM for guests. A private burial service will be held on Tuesday September 22.

The campus community fondly remembers Maestra Howe for the greatest performance, which was her life, and we say Brava!