Qian Ye is fluent in three Chinese dialects, in Russian and in English. But she is at her happiest when she expresses herself in two universal languages—art and music.

“Since I was a very little girl, the dreams of music and art was put into my heart deeply and it has been always there,” she shares.  “Art and music are like brothers and sisters. We can see colors through music and hear melodies through art. They support and assimilate into each other so that the beauty of harmony and sensitivity will be able to flow as shining stars. Both art and music present life, soul and spirit. It builds the deep connection among people. They are not about pride but about embracing and loving one another. It is the place where our spirits meet and melt together.”

Born in Zhejiang Province, China and raised in Shanghai, Qian earned her bachelor’s degree in music at the Shanghai Conservatory and moved to Russia to pursue Master of Music in Opera and in Concert Performance degrees and a master’s degree in art from N. Novgorod Glinka State Conservatory in Russia. While studying in Russia, she met Ron and Wilma Priest, two Alliance international workers from Ohio who welcomed her and other university students into their home and their hearts. It is through her friendship with the Priests that Qian became aware of Nyack College.

Though Qian earned a Nyack bachelor’s degree in communications and a Master of Science in Organizational Leadership at Nyack’s School of Business and Leadership, her heart for opera was undeniable. During her time at Nyack, she performed with the School of Music’s Opera Workshop, the Nyack College Chorale and was featured in solo recitals.

In addition to being an exquisite operatic performer, Qian is an accomplished artist whose “360 Degrees” art show was on display in Nyack’s President’s Hall. In 2016, she created a 16’ x 7’ mural which was featured at the Global Mural Conference in Fairport, NY. In 2017, she was one of several artists whose work was featured at The Common Place Art Exhibition in Lower Manhattan. 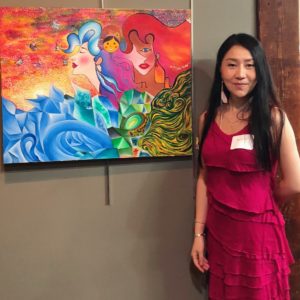 The Rochester Art Club in New York presented an International Women Artists Exhibition in 2019, which included Qian’s oil paintings. Based on the response to her talent, she was invited to display her work in the 2020 ArtExpo New York featuring more than 400 artists from around the globe. Because of the pandemic, the exhibition has been postponed until April 2021 at Piers 92/94 in Manhattan. A solo exhibition, “Esprit de Parfum,” is also scheduled for September 2021 in the Stride Arts Gallery in New York City.

There’s no doubt that while the global pandemic modified our ability to be entertained, Qian’s world is comforted by art and music. In her words, “Through art and music, we can share heart, pain, joy, tears, smiles and spirit together, without words.”

The little girl who dreamed of art and music is now a woman who unveils her dreams so that others can “see colors through music and hear melodies through art.”