Those words were the declaration made by Dr. Julio Aponte, executive director of Nyack’s Seminario Teológico de Puerto Rico (STPR) in San Juan last year after the beautiful island was struck by vicious Hurricane Maria. What our campus family in Puerto Rico endured and survived—not just in September 2017, but in the grueling months to follow—is a victory worth remembering.

Dr. Aponte shared this glorious report today: “Since Hurricane Maria, STPR has recovered from the Hurricane almost 100%. The damage to the physical structure was almost completely repaired, which gives the students the assurance of enjoying a safe environment for their studies. During the current fall semester, our total enrollment—undergraduate and graduate degree programs—reached 194 students, an increase of 9 more than fall 2017 when Maria hit PR. Our retention rate in the master’s program was 98.34% and in the undergrad program was 83.33%. This data shows that even after the Hurricane, the seminary in Puerto Rico, contrary to other higher education institutions on the island, has maintained its development and growth.”

At Nyack’s May 2018 Commencement, Dr. Aponte was presented with an honorary Doctor of Divinity. His words portrayed strength, courage and an exceedingly, abundant covering of God’s grace. This is an excerpt of his remarks:

“Service to others has been a way of life and a legacy of Nyack College and Alliance Theological Seminary since its foundation. We live to serve; God has endowed us with the courage to serve, not only our student community, but an entire country in need. This was clearly demonstrated in the past months as a result of two devastating hurricanes over our island, Irma and Maria.

On the 20th of September 2017 at around 6:30 a.m., the eye of Hurricane María, the most violent one ever in our modern history, hit Puerto Rico. Maria entered through the southeast zone, as a category 4 with winds of 165 miles per hour. Maria took us by surprise because in less than two days it had changed from a category 1 to category 5.

Maria was on the island for almost nine hours with the eye crossing over the island covering it with its winds and rains, leaving behind total devastation. The intense rainfall continued for an added three to four days. Everything became dark. Day became night. The Hurricane winds knocked down the entire electrical grid of the island. Not only did we lose electrical power, but also the entire telecommunication network (radio, TV, cell phones) totally collapsed for weeks.

Just as the people of Israel for generations told of their bitter slavery in Egypt, so our children will tell our grandchildren and generations to come about “the day María came.”

No doubt, it will take us a long time to be able to forget a storm of this magnitude and the psychological, sociological, physical and material damage it left behind. Many are still going through post traumatic stress syndrome as a result of what happened.

Two days after the storm passed and overcoming all kind of obstacles we made it to the Seminary building. What did we find?

What many of us suspected, a four-story building, that had resisted previous storms, was “defeated” by the fury of an atmospheric phenomenon that had left it severely wounded: windows were broken, acoustic ceiling tiles were on the floor, air conditioning ducts were hanging, the library carpets were flooded; in sum, a disaster. Although the library suffered serious damage, the hand of God did not allow any of the books to be damaged. Miraculously there was not even one wet book.

No one should be surprised at the emotional state of the staff when they saw what happened: a profound sense of emptiness and emotional darkness, of loss, confusion, and discouragement. However, after a time of prayer, reflection and catharsis, we understood what our responsibility was: our commitment to our students. Aware that the effort would be almost impossible, we filled ourselves with courage to serve and faced the crisis.

With the words from Nehemiah, “Let us arise and build,” we began the task of contacting our students to find out their individual situations; it was a superhuman effort due to the lack of communication. In fact, we contacted very few, hoping that they would somehow reach us, although we did not have telephone service.

A week later, we had an emergency meeting with the faculty and asked them to join the effort to locate their students and at the same time, to make the necessary arrangements so they wouldn’t lose their classes. Our faculty, moved by a great sense of commitment and filled with courage to serve, fulfilled their task miraculously by the grace of God.

In just two weeks after Hurricane Maria, we resumed our semester installing solar lamps in the classrooms and in the stairwells. I still remember that we seated students in the back of the classroom so that they would raise an arm to activate the sensor and keep the light on.

The students we were able to spread the word, and little by little, the others returned, in spite of the lack of electricity at their homes, towns, and of having to drive in total darkness, they were full of courage to serve, continuing their studies and reuniting with their classmates.

Later, in the face of the bitter reality that we would not have electrical power for months, we acquired two small generators that helped us illuminate the classrooms, but two weeks later they were stolen. That was the crucial moment in the effort to keep operations of the seminary alive. We made the difficult decision to go against all our economic possibilities to buy a 65K generator at a cost of $45,000 that could finally energize the building.

Simultaneously with all these efforts, we provided help to students who had lost everything; some lost their homes, others experienced total isolation in their towns since the water rose over ten feet in the streets, later becoming mud, and single mothers who were in distress with their children amongst many others. God gave us the courage to serve and minister to their lives in a special way.

On Saturday, October 28, we were able to visit three families from the Seminary who live in the central mountain range, a trip of about two hours from the Seminary. These families belong to the Mennonite churches in Puerto Rico. The purpose of our visit was to help them clean and restore their land, which included stores and homes that were cruelly impacted by the Hurricane. We brought them financial aid; we worked to remove debris; and we brought water, food, and spiritual and psychological help to their children. Some of the food was provided by students who are members of the Puerto Rico National Guard and supplied packages of canned food. This is more evidence of having the courage to serve.

On December 7, 2017, Seminary students and faculty made an impact in our immediate neighborhood. They distributed water, nonperishable food, personal hygiene items and other kinds of help, such as psychological counseling to the elderly. We distributed food vouchers to more than 146 people (51 children, 90 adults, and 5 elderly people) thanks to a $6,000 gift from the Council of Churches of Puerto Rico.

As a Seminary, we did not want our neighbors to see the students just entering a building to study. We wanted them to know the human side of our students—men and women committed to minister to others with compassion and a great need to serve.

On the other hand, our finances began to decrease dramatically because the students did not have income as the result of the loss or suspension of their jobs. Suddenly, we found ourselves in a very difficult financial situation since the expenses were exorbitant, and there was no income to pay our personnel and maintain our operations.

Again, our faculty demonstrated the great courage in their hearts to serve, expressing their willingness not to be paid their honorariums for teaching. They only wanted to see their students come to the classrooms. But God knew our situation. His hand was manifested through individual donations, also from churches in the United States, The Christian and Missionary Alliance (C&MA) headquarters in Colorado Springs, districts of the C&MA in and outside of Puerto Rico—and we were able to survive. 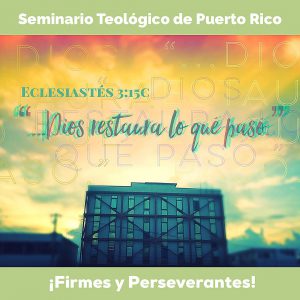 Nehemiah 2:17-18 reads, “Then I said to them, “You see the bad situation we are in, that Jerusalem is desolate, and its gates burned by fire. Come, let us rebuild the wall of Jerusalem so that we will no longer be a reproach. I told them how the hand of my God had been favorable to me and also about the king’s words which he had spoken to me. Then they said, let us arise and build.”

Just as Nehemiah and his courageous men were full of courage to serve others, we, too, arise and build. To God be the glory!”