Nyack College Assistant Professor of New Testament and Second Temple Literature, Dr. Jeffrey P. García, is the author of a new book, On Human Nature in Early Judaism: Creation, Composition, and Condition, Volume 34 in the Journal of Ancient Judaism Series published by Ferdinand Schöningh, an imprint of Brill.  The book will be released on November 16, 2020.

Dr. García comments,  “This book is a thoroughly revised version of my doctoral thesis. So, the book has been in the process for quite a while. It was completed, both writing and revising, while teaching full time at the college. The topic was developed from my adjacent work on charity and Jesus’ focus in his ministry on taking care of the poor. This will likely be the content of my next book, which I am already in the process of researching. Yet, the two themes, human nature and charity, may seem unrelated. But the logic is simple: Jesus’ view’s on taking care of those in need was founded on the idea that humanity was created in the image of God. That is human nature is stamped with the image of the king. It is clear that Jesus adapts this from ancient Judaism. Researching this idea, I realized that Jesus’ teachings were part of differing approaches to this subject. From there, I began to examine for several years differing views of human nature that existed in the first century (sometimes called Second Temple Judaism). Nearly all of these conversations revolve around humanity’s creation, composition, and condition, which form the three sections of this book. A warning for any perspective readers, this is an academic volume, so it is specifically directed to specialists in the field.” 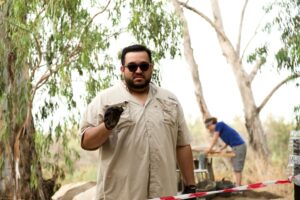 A member of the Nyack College faculty since 2012, Dr. García is a 2005 Nyack alumnus and earned his BA in Biblical and Theological Studies. He studied with Dr. R. Steven Notley, with whom he has participated in the El Araj Excavation Project in Israel.  With Dr. Notley, he co-edited The Gospels in First Century Judaea (Brill, 2016). Dr. García is the author of Understanding the Gospels as Ancient Jewish Literature (Carta: Jerusalem, 2018). He has contributed to the Biblical Archaeology Review, Lexham Bible Dictionary (Lexham Press, 2016), and The Routledge Encyclopedia of Ancient Mediterranean Religions (Routledge, 2015).

He earned his Ph.D. in Hebrew and Judaic Studies at New York University, where he studied under the direction of world-renowned Dead Sea Scrolls scholar Dr. Lawrence Schiffman.  Dr. García has been a member of the Jerusalem School of Synoptic Research since 2008.

Learn more about On Human Nature in Early Judaism.