Nyack College Vice President for Student Development and Dean of Students Wanda Velez made history as the first Latina appointed to this post on the executive leadership team. Her decades-long relationship with the institution began as a student. She earned her bachelor’s degree at Nyack (‘99) and a master’s degree at ATS (’02). 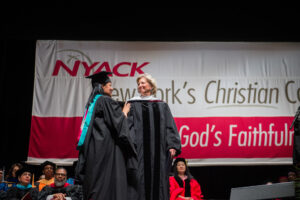 Dr. Shirley Hoogstra, CCCU president has been a mentor to Wanda for nearly a decade. Dr. Hoogstra, (the recipient of a 2019 honorary Nyack Doctor of Letters) has watched her mentee thrive. Employees of other CCCU colleges have visited the Nyack campus to shadow her in her Dean of Students role.

Wanda is also an alumna of the Council for Christian Colleges & Universities (CCCU) Women’s Advanced Leadership Institute (WALI) and the Multi-Ethnic Leadership Development Institute (M-ELDI). She also serves on the CCCU Commission for Chief Student Development Officers. In 2019, she became a Resource Leader for M-ELDI . She served briefly as a commissioner with the CCCU Commission on Diversity and Inclusion.

Wanda joined the staff of Nyack College in 2001 and served as the director of alumni relations until 2005. In 2003, while still managing her alumni relations role, she joined the Office of Student Development as the resident director for Simpson Hall, the women’s dormitory. In 2004, she was appointed director of resident life. In 2010, Wanda was named Dean of Students on the Rockland County residential campus. A student in the ATS Doctor of Ministry program, she marked another milestone recently—reaching her 20th year as a Nyack College employee.

Wanda Velez has been legendary at mentoring hundreds of Nyack students over the years and serving Nyack/ATS as a dynamic leader. However, her true and treasured calling is being a Proverbs 31 woman is to her husband, Luis, (NC’08) and mother to four children, Isaiah (NC ’17), Iza, Jada and Javian.