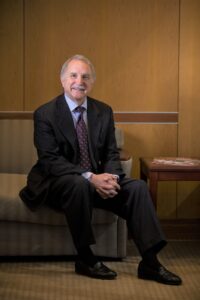 At the end of this month, Dr. Michael Scales will conclude his tenure with the distinction of being named President Emeritus by the Nyack College and Alliance Theological Seminary Board of Trustees.

The campus community is grateful for the servant leadership of President Scales, and not just for his tireless work, but because of his genuine allegiance to the College and Seminary. Dr. Scales is known for celebrating the character and the gifting of people he calls his “heroes,” who also lead with a servant’s heart. At a virtual spring event when Nyack and ATS employees celebrated success despite the challenges of 2020-2021, individuals who live out the institutional mission and core values were recognized for their service.

A special service award was made the namesake of a beloved alumnus and employee after his untimely passing. That honor, the Rick Santiago Commitment to Mission Award, is presented annually to one faculty and one administrator/staff recipient.

Dr. Carlos Velez was the faculty member recognized for being academic excellent, personally transforming, and socially relevant, standards he contributed to the lives of his students for some 18 years. Student evaluations consistently praised him for being “thorough, clear, informative, fair, encouraging, strengthening, caring, patient, anointed, gifted and passionate.”

Constance Diggs was the staff/administrator recipient for being academically excellent, intentionally diverse, and socially relevant. Going above and beyond what is required, Constance has played a significant role in accreditation and assessment in her role as Director of Academic Affairs for graduate and undergraduate programs at Alliance Theological Seminary and the School of Bible and Christian Ministry.

The following employees were also acknowledged with years of  service awards.

30 Years of Service: Dr. Martin Sanders has been the director of the Doctor of Ministry Program since 2011. He began his service in 1991 as a full-time associate professor of theology, director internship and director of the Center for Evangelism. Dr. Sanders is the author of several books including The Power of Mentoring: Shaping People Who will Shape the World, which he co-authored Leighton Ford.

30 Years of Service: Penny Foland serves faithfully in the Athletics Department as the athletics trainer clocking a six-day work week that often spills into the weekend. In 2019, Penny was named the NCAA Division II Athletic Trainer of the Year by the Intercollegiate Council for Sports Medicine.

Employees who have served up to twenty years are: