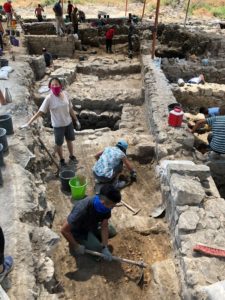 undertaken by a team from Nyack College in partnership with a team headed by his colleague, Dr. Mordechai Aviam of Kinneret Academic College for the fourth summer.

This season Dr. Notley explained, “Our two primary aims were to locate the Byzantine Church of Peter and Andrew mentioned in ancient pilgrimage itineraries, and to establish with greater certainty that there existed at el Araj a settlement in the Roman (New Testament) period.”

Excitement continues to build around this groundbreaking work that adds another epic chapter to Nyack’s story.

Congratulations to Dr. Notley, Dr. Aviam and their team members whose work is being acknowledged globally!