Joe Albert Lima, 1975 Nyack College alumnus, is director of the play “Medal of Honor Rag,” which opens at Rockland County’s Antrim Playhouse located at 15 Spook Rock Rd. in Wesley Hills, NY on Friday, February 8 at 8:00 PM. Additional performances are Saturday at 2:00 PM and 8:00 PM and Sunday at 2:00 PM 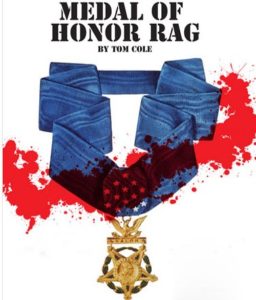 The one-act play, written by Tom Cole and produced by Penny Buccafuri, takes place in an Army hospital and is based on a true story of the first black Vietnam veteran to receive the Congressional Medal of Honor. Audiences will get a glimpse inside the heart and mind of the decorated soldier and his psychiatrist. Their explosive exchange reveals the brutal ravages of war.

Joe Lima also offered a directorial hand in the early stages of another upcoming local production, “Antigone on Robben Island” written by Samuel Harps, which premieres on February 8 at the Nyack Center, 58 Depew Avenue in downtown Nyack. This play recaptures an account of Nelson Mandela and other Robben Island prisoners performing “Antigone” during their incarceration in South Africa.

Also an actor and playwright, Joe has directed productions at the Elmwood Playhouse in Nyack including “A Time to Kill,” “Intimate Apparel” and “A Soldier’s Play.” His acting roles at Elmwood include the characters Gabe in “Fences” and Memphis in “Two Trains Running,” both written by the late prolific playwright, August Wilson. Joe’s full-length play, “A Short Walk Into Sunshine, was produced at the Westchester Collaborative Theatre in Ossining in 2015.”

Nyack’s Provost and Vice President of Academic Affairs Dr. David Turk fondly recalls Joe, his Nyack classmate, directing a production of “A Raisin in the Sun” in the early 90’s.