Those words were emblazoned on the cap McKenzie Evans decorated for her May 2019 Nyack College commencement ceremony. 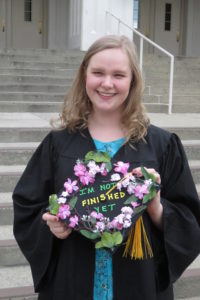 After graduation, she confidently expanded on that phrase. “What the Father has started in me at Nyack College, He will continue. I may have completed my degree, but I’m still being transformed. He is still working in me and through me. I am still growing and there is work to be done.”

It’s been just a few short months since McKenzie crossed the stage of Westchester County Center to receive her degree in adolescence education. She’s already crossed the Atlantic to switch hats and begin her two-year assignment with a non-profit organization teaching English to ninth and tenth grade international and local students in China.

What she considered more important than her self-assessment of “failure” was the commitment to her employer. When they asked if she had a preference of where she’d like to teach, her response was, “Send me where you need me to be.” In her first year, she felt inexperienced at working with English language learners or managing a classroom. But she returned the next summer to face the challenges of being a young educator in a new culture. “These students were worth it,” she explains. “The Lord gave me a supernatural love for them.”

During her junior year at Nyack, she gained more confidence and she tackled her studies with even more determination. As she began to anticipate returning to Hong Kong for a third summer, one month before her expected departure date, she learned that the opportunity there was no longer available and she was assigned to teach in China.

In her senior year, McKenzie grew in her professional approach to the call on her life. “My most valuable Nyack experience was being blessed daily by professors who are dedicated to students, to Nyack College and to God.” She also experienced personal growth through the rites of passage program, “Woman,” established to encourage female students in their relationship with God, self, others and His creation.

Because McKenzie grew tall enough in stature to face her “Goliaths,” it was no surprise that after completing her field work during her last year of studies, she received the Nyack School of Ed’s coveted Apple Award for “Student Teacher of the Year.” This most prestigious award is presented to the student “who most consistently displays overall professionalism, a commitment to excellence, lives a positive Christian witness, demonstrates remarkable teaching capability and has enthusiasm for the teaching profession.”

What would she say to other “McKenzies” considering enrolling at Nyack?

“God has given you talents and skills. Delight in your craft. Even if your first try is a disaster, push in and trust where the Father is leading you. There are professors at Nyack to train you and prepare you. God has brought you to this time and this place for a reason. Sometimes you have to say “Yes” to the Father before He gives you the desire to go out and serve. The safest place for you is in the center of God’s will.”