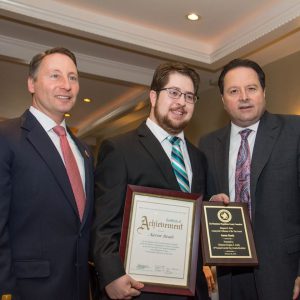 Since graduation, Aaron (pictured holding awards) has spent most of his time in politics and government. He began as a volunteer on Westchester County Executive Rob Astorino’s re-election campaign and was subsequently hired as staff on Mr. Asotorino’s 2014 gubernatorial campaign.

After a short time, thereafter, in the Westchester County government’s Information Technology department, he was promoted to be a proclamation writer in the Communications Department of the County Executive’s Office. He is currently a scheduler for Julie Killian’s New York State Senate campaign.

Aaron Reale is the recipient of the Margaret S. Soter Countywide Volunteer of the Year Award.