Nyack Athletics is proud to announce that Head Men’s Soccer Coach Alex Schmidt and Head Women’s Soccer Coach Emma Webb have both been named Central Atlantic Collegiate Conference (CACC) “2021 Coach of the Year.” The selections are made by the Sports Information Directors of each competing school in the conference. This is a first-time win for both Alex and Emma. 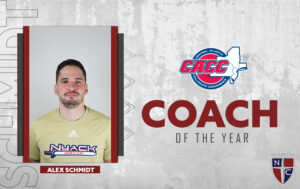 Alex Schmidt has been the head coach for two years and is a former assistant coach working with Athletic Director and Soccer Coach Keith Davie. An alumnus of both Nyack College and Alliance Theological Seminary, Alex earned a Bachelor of Science in 2013; a Master of Business Administration in 2014 and a Master of Divinity in 2019.

With a father who played soccer professionally in Germany, Alex’s passion for the game was homegrown, but he chose to pursue coaching. Of his dad, he says, “He is, to this day, one of my greatest mentors when it comes to soccer and we exchange ideas periodically as he is still actively coaching back home. Besides that, I love how coaching provides me with an opportunity to mentor young men. It was my biggest takeaway as a student-athlete at Nyack that I had men of faith come around me and mentor me through the ups and downs of life.”

Alex exemplifies how athletics at Nyack is about more than sports.

“Throughout my time at the Seminary, I realized that God has called me more towards the people outside of our church buildings and I see the sport of soccer as a great tool to build relationships and bring the whole Gospel to the whole world. Soccer allows us to create relationships without having to speak the same language. It brings people from all nations together. As a coach, I am privileged that I get to use soccer as a vehicle for His kingdom to influence my own players, but also players and staff from other institutions by the way we act and carry ourselves.  It is my desire to create a team that I am proud to coach.”

Speaking of being proud of his team, he shares, “Three players, Mitchell Reed, Javier Fernandez, and Max Meurer were named to the Central Atlantic Collegiate Conference (CACC) All-Conference team. Additionally, Max was named the CACC “Goalkeeper of the Year.” We are returning 20 of 22 guys and are having a strong group of new players coming in for the 2021-22 campaign.” 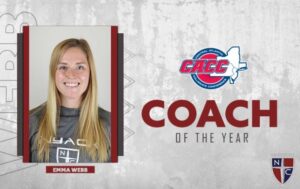 Emma Webb became the head soccer coach for women in 2019. After playing soccer on her college team for four years, she later became interested in coaching. With an undergraduate degree in business administration and communications from another Christian college, Emma took a post-graduation job as a fashion stylist at Nordstrom’s while also coaching soccer at a Christian college in Boston.

“I felt a calling to pursue coaching in a more full-time status,” she explains. “And it was that same week that I saw the Nyack coaching position was open.”

Her dad, the athletic director at her alma mater learned of Nyack’s impending move to New York City. “It had been a dream of mine to live and work in NYC. By pursuing coaching, I felt that I was giving that up,” Emma says. “There was not a private Christian college that offered athletics in the city. When I was offered the Nyack job, I felt God’s hand was truly at work.”

Coach Emma also has a chance to use her coaching skills on another platform: she has served as a Nyack admissions counselor for all prospective student-athletes since March 2019. On or off the field, she is living her dream at Nyack.

“It has been a privilege to coach the group of young women that are a part of this Nyack College Women’s Soccer Team,” she comments. “I have been so proud of the dedication, determination and resilience this team has shown through the past couple of years. The future is something to be excited for when I look at this group and the goals they have for themselves and this program. I am thankful to Coach Davie for giving me the opportunity to be a part of the Nyack family and trusting me with this team.”

Coach Alex adds, “In light of the pandemic, we are just grateful that we get to be out there and play the sport we love. I want to thank the institution and the leadership for making this possible. There are some schools within our conference that had opted out of sports, so us competing in the spring wasn’t necessarily a given.”

Congratulations to Coach Alex and Coach Emma for representing soccer and Nyack College Athletics so well!