Luis Diaz, a Nyack School of Music alumnus, will be a featured artist in “Masterworks for Two Flutes & Orchestra” at Venice Presbyterian Church, 825 The Rialto, Venice, FL on Saturday, February 8 at 3:00 PM. The talented flutist will share the stage with Venice Presbyterian’s 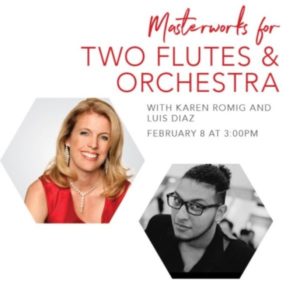 own Karen Romig in a program of music for solo flute by John Rutter and Mozart, as well as duets based on operas such as Verdi’s Rigoletto and Bizet’s Carmen. A chamber orchestra and a 50-piece orchestra will also be a part of this highly anticipated performance. Another School of Music alumnus, Jamal Sarikoki , artistic director for the Venice Community Concert Series, will serve as conductor.

While an elementary school student, trips to the New York Philharmonic piqued Luis’ interest in classical music. His music studies began through a scholarship program sponsored by the Philharmonic at the Lucy Moses School in Manhattan. Under the guidance of Dr. Valerie Holmes, he began taking lessons at the age of 12 and entered the Special Music School.

Luis attended the Frank Sinatra School of the Arts, the prestigious performing arts high school, founded by music icon Tony Bennett. Mr. Bennett discovered Luis practicing in a staircase one day and after listening to him rehearse a concerto, he arranged for him to perform at Carnegie Hall with Alexander Markov, one of the nation’s top violin virtuosos.

At Nyack College, Luis studied under the tutelage of School of Music professor, Dr. Marie Herseth Kenote, a former substitute flutist under the baton of Leonard Bernstein. In 2013, Luis participated in the Nyack College School of Music Chamberfest Asia tour which traveled to Hong Kong, Beijing and South Korea. In March 2014, Luis was one of three students chosen to perform in a masterclass with virtuoso flute player, Sir James Galway. At Nyack , he earned a Bachelor of Music in instrumental performance. He was invited back to join the Chamberfest tour in 2016. Luis earned a master’s degree in flute and Music-in-Education at the New England Conservatory of Music.

The up and coming artist has enjoyed performing in pit orchestras for over 50 musical productions and has played for the likes of the Bernstein Estate and the Yiddish cast for “Fiddler on the Roof” on Broadway.

For the last five years, Diaz has worked for French Woods Performing Arts Festival during the summers, where he teaches and oversees sectionals, lessons, pit rehearsals and prepare students for competitions and auditions.

Luis is a consummate stylist, who enjoys a wide range of music styles from Baroque to new music genres. As versatile as his musical taste so is his thirst for knowledge. So what’s next for Luis? He’s now on to completing a degree in culinary studies!