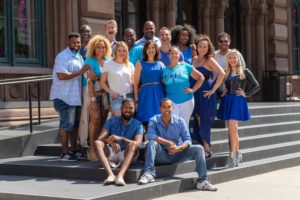 BIV will be featured in a 25th Anniversary Holiday Concert, “Seasons of Inspiration” on Monday, December 16, 2019 at 7:30 PM at Symphony Space, 2537 Broadway at 95th St. in Manhattan. Prof. Jordan invites the campus community to add this concert to their plans for celebrating the sacred season. The program repertoire will include selections from their Grammy-nominated album, “Great Joy: A Gospel Christmas,” and “Great Joy 2: Around the World.”

Prof. Jordan, a singer, songwriter exemplifies the caliber of gifted men and women who educate and enhance the talent of Nyack music students. The singer, songwriter and conductor, graduated from New York University and Boston University where he received his bachelor’s and master’s degrees, respectively. He has been on the faculty of Nyack College since 2014.

Darryl Jordan continues to perform as a baritone/tenor soloist in and outside of the Tri-State area. Represented by Gregory Sheppard Artists Management, he has sung with Opera Ebony, Redeemer Presbyterian Church, St. Frances De Sales R.C. Church, Mott Haven Reformed Church, Randolph Noel and the Brooklyn Arts Ensemble, Dion Parsons and the 21st Century Band, Gregoire Maret & the Stephanie Fisher Voice Ensemble, Vincent Herring & the Nyack Jazz Ensemble, and most recently as a chorus member and soloist in “The Underground Railroad: A Spiritual Journey,” with famed soprano Kathleen Battle at the Metropolitan Opera House.

A sought-after conductor and clinician, he conducted Nyack’s Off-Broadway production of “West Side Story” and the “Celebration of God’s Faithfulness” performance at Lincoln Center. He is proud to be the choral director at the historic Mt. Lebanon Baptist Church in Brooklyn. With his music group FreeMind, he brings a unique brand of neo-gospel-soul music to the world. An Apollo Amateur Night winner, he is set to release his second project, TIME, in the coming year. He seeks to empower the community through the gift of song, and is blessed to continue to share that gift teaching vocal and jazz courses at Nyack’s New York City campus.