While the unspeakable pain of loss has ambushed innumerable families during the COVID-19 pandemic, countless stories of people rallying to meet desperate needs is the hope-filled light piercing the darkness. Alliance Theological Seminary student Deborah Kim and her family are among those who are playing a vital role in meeting a crucial need for people who are producing protective facial masks.

In 1993, Panda International Trading of NYC, a sewing and notions store in Manhattan’s Garment District was founded by Deborah’s late father David (Won Koo) Kim, a man she proudly describes as “an entrepreneur, a leader and pioneer in business as well as in church and ministry.”  Today her mother, 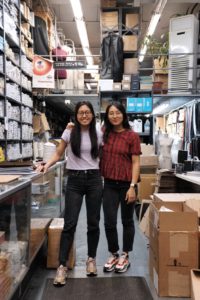 Byung Bok Kim is the owner; an older sister Veronica is CEO and Deborah is the accountant.

Unfortunately, this past March, Panda International fit the category of  “non-essential businesses” and was forced to close its doors. Compounding that sudden distress was the heartbreaking need to furlough eight employees—evidence of COVID-19’s disruptive threat to physical and economic health.

However, with personal protective equipment (PPE) suddenly an essential commodity, the Kim family business became an invaluable source for online sales. Regular patrons—fashion designers and fashion design students—spread the word that Panda was a supplier and orders for elastic to anchor masks skyrocketed.

“Currently, we are working anywhere from 30-45 hours a week,” she says. “The hours have not changed too drastically, but the work that we’re doing now demands more physical labor, as we are mostly shipping online orders. We have many people telling us that they are making masks for their local hospital, doctors and nurses.”

Deborah, who was an East Asian Studies major with a concentration in Chinese says, “I felt led to pursue my major because the Lord put a burden on my heart for China. In my last year of undergrad, I applied for a job in China and was offered a teaching position, but I felt the Lord asking me to trust Him with this, to serve my family and that He would release me in His time.”

Her attentive ear for God’s leading is how Deborah became a student in the M.Div. program at ATS this year. She explains, “Although I’m not in full-time ministry, it is so encouraging to be in a community that shares a common desire to minister to the Lord and to people.”

“I know many people who have come through ATS, and I’ve heard from them how much they love this school and the professors. I’ve heard great things about other seminaries as well. So, at first, it was challenging to commit to one school. However, there was an event where Dr. Wanda Walborn was a guest speaker. I was on the worship team and had the opportunity to see Wanda Walborn up close as she preached. I was so moved by what she was sharing and could see the compassion and fear of the Lord in her face. I think it was that night where I felt this peace about ATS and felt confident that the leadership and the professors at this school would be Spirit-filled, prayerful, and God-fearing.”

With a semester under her belt, Deborah says, “I’m hoping this degree will help me in the long run as I seek to find an intersection of business and missions, whether that be overseas or here in the U.S. In undergrad, I learned the history, socio-political, economic relations in East Asia through a secular worldview. In one of my (ATS) classes, Theology in a Global Context taught by Dr. Stanley John, I learned about world cultures through a biblical worldview. I don’t know where I’ll be in the next 5 to 10 years, but I know that I will never regret following the Lord and His voice.”