Carl Ralston grew up in Cuyahoga Falls, Ohio. After starting his own roofing company in Texas, he moved back to Ohio and worked in the insurance industry for twenty-five years before getting involved in nonprofit work. He has earned several degrees: two associate degrees, a bachelor’s, and a master’s, but participating in the Doctor of Ministry program at Alliance Theological Seminary has been the most impactful educational experience of his life. In his words, “I’ve had a lot of training in the business world, and this is just by far, hands down, the most practical, useful, life–changing schooling I’ve ever had. I recommend it more than anything.”

Carl is the president and founder of Remember Nhu, a nonprofit seeking to end child sex slavery through education, scholarships, and the creation of “safe houses.” He found out about Alliance Theological Seminary’s doctorate program when he was looking for something to do during his sabbatical. Seeking to learn more about leadership, he asked a friend to recommend some pertinent books. That friend instead told him about the Doctor of Ministry program at Alliance Theological Seminary. Carl didn’t intend to fully enroll at first. As he recalls, “I was able to get into the program very quickly with the idea of taking two classes, but the first class was so revolutionary in my life and changed my life so much, I wanted to continue.” He also sensed that God would use his dissertation to benefit the children Remember Nhu seeks to help. 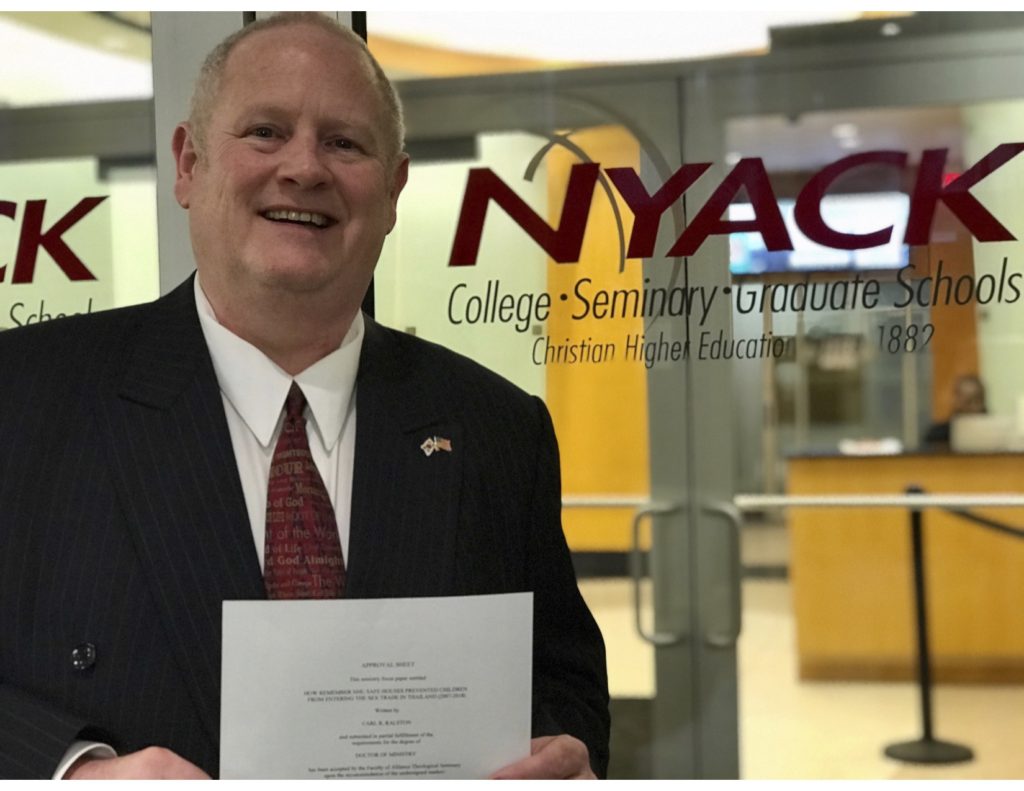 According to Dr. Frank Chan, Carl’s dissertation coordinator, “We want our students to conduct research that will assist others who are interested in solving ministry problems around the world. Carl’s technique of interviewing village chiefs enabled him to determine that Remember Nhu prevents roughly five children per village per year from entering the sex trade in Thailand. Prior to Carl’s work, there was little information on how to measure the “prevention footprint” of his ministry.”

The lessons students learn during the Doctor of Ministry program at Alliance Theological Seminary are not just theoretical, they have practical applications. Carl learned this firsthand when he had to navigate challenging conflicts with a number of his board and staff members: “I had practical things going on in my life that my class helped me through tremendously. There were a few people in the organization that, without that class, I would have just stone cold fired. I know that I was able to represent the love Jesus to them much more. One of them did end up leaving the organization, but it was their choice. I tried very hard to avoid it.”

In describing the transformation he’s experienced as part of the Doctor of Ministry program at Alliance Theological Seminary, Carl says that one class in particular, “radically opened my mind and eyes and thoughts on how to be a leader.” He’s not just learning new things; he’s also gaining a new perspective and being transformed. In his words, “I have literally thanked God more than five hundred times for the things that went on in Soul Care. God delivered me from things I had no idea were affecting me.” Carl used to have an overactive mind and found it difficult to rest or relax. “I thought everybody’s mind ran like a dual computer. I would be thinking of two different things all the time—twenty-four hours a day. My mind never quit running. In the middle of the Soul Care class, I realized God had cleared my mind. And if I would’ve just gotten that one thing from the class, it would have been worth all the tuition and hours and effort, because it’s changed my life in ways I didn’t even know [were possible]. Soul Care radically changed my life and my wife’s life.”

The transformation Carl experienced as part of Alliance Theological Seminary’s Doctor of Ministry program was more than intellectual and spiritual, it was physical as well. As he recounts, “it has really dramatically changed both me and my wife. For me, the clearing of my mind has been amazing. Dr. Ron Walborn prayed for my class—not for me, but I happened to be the one that he had his hand on. I received a partial healing of my diabetes. It was a very meaningful healing in that it healed an unquenchable thirst I had been suffering with for five or so years. It also helped me to sleep through the night rather than waking up four or five times every night. So, it was a pretty substantial physical healing as well.”

In addition to giving students a transformative education that will prepare them to work wherever they are called to go, the Doctor of Ministry program at Alliance Theological Seminary also facilitates deep and lasting relationships between students within a cohort. Meaningful friendships are formed, and opportunities to collaborate and support one another’s ministries are very common. Carl has experienced this as well, “One of the people in my cohort came all the way to Thailand with a team to visit our work because of our cohort. So, I totally believe in it.”

On December 5, 2019, Carl successfully defended his doctoral dissertation to complete the Doctor of Ministry program at Alliance Theological Seminary. Carl’s dissertation, “How Remember Nhu Safe Houses Prevented Children from Entering the Sex Trade in Thailand (2007-2018),” will be published on the ProQuest website and available to the public. In the meantime, you can request a digital copy by emailing Dr. Frank Chan.

Doug Balzer works for the Christian Missionary Alliance in Canada. He is currently enrolled in the Doctor of Ministry program at Alliance Theological Seminary. The following interview was conducted at the Rockland County campus of […]

DMin Spotlight on the President of the C&MA in Canada

April 24, 2018 Nyack College Alliance Theological Seminary Comments Off on DMin Spotlight on the President of the C&MA in Canada

David Hearn currently lives in Toronto, Canada and is the President of The Christian and Missionary Alliance in Canada. The following interview was conducted at Alliance Theological Seminary in Rockland County while student cohorts were […]