“Someday I want to use my nursing education to make a difference in the lives of people overseas. When I go, I really want to understand the needs of the people in the places I’d like to serve. I want to bring the love of Jesus. Nyack College is equipping me to be ‘His hands and feet’ and to have impact that is sustainable.”

Lauren Lebo was sincere when she made those remarks in 2015 while she was a student at Nyack’s College Cheryl Phenicie School of Nursing. The 2016 alumna made good on her word. Now a Nyack adjunct professor, she coordinated a trip to Guatemala for current Nyack nursing school students this past January. Based on her month-long service last year at Corazon de Amor Clinica in Guatemala City to fulfill  her master’s thesis requirement for a degree in public health, Lauren leveraged her relationship with the clinic to establish an opportunity for Nyack students to earn credit for their clinicals.

A registered nurse at Blythedale Children’s Hospital in Westchester County, New York, Lauren and Dr. Inseon Hwang, dean of Nyack’s nursing school, supervised 11 students on the trip. In the impoverished areas of Guatemala City, they served 100 patients at the Corazon de Amor Clinica and presented a health education seminar for 40 patients on the topics of diabetes, hypertension, healthy nutrition and hand hygiene. The emerging Nyack nurses also visited a community health center and made home visits to become acquainted with local families. They had an opportunity to interact with homeless and drug-addicted people.

At a Christian elementary school, Prof. Lebo taught CPR and how to respond to people who are choking. Dean Hwang taught first aid treatment for burns, ankle sprains and head injuries. The school’s teachers and staff members received a first aid training certificate.

Nursing is a calling that Lauren has diligently pursued. When she is not serving in the medical field, lacrosse is another passion that continues to occupy her time. A true pacesetting athlete, Lauren was the first statistical champion in lacrosse since the sport’s inaugural season was launched at Nyack in 2013. She was named the National Collegiate Athletic Association (NCAA) Division II statistical champion in women’s lacrosse for most draw controls per game in the 2015 season and was named Intercollegiate Women’s Lacrosse Coaches Association’s Division II Scholar-Athlete of the Year. She was also honored with the Jonathan L. Gainer Memorial Sportsmanship Award, the highest award presented by the Athletic Department at the annual Warrior Awards Ceremony. 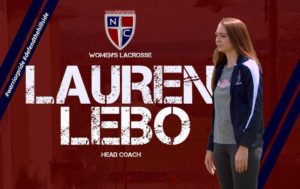 Not only is Lauren on the faculty of her alma mater, today Lauren is also Head Coach for Nyack’s women’s lacrosse team.

Whether she’s serving on a team of nurses or leading a team of lacrosse players, there’s no doubt that Lauren Lebo is a game-changer.